jebrs2 wrote:New to darkside, what's the difference running a tube or not? I currently run a tube and M/T on my V-star1100. I have a spoked wheel. Will I need a tube to darkside with the same rim? I know, this could be a really dumb question! Also, thinking about a Goodyear Eagle tire(195-60/15 C/T vs 170-80/15 M/T). Am I way out there as far as size/compound? 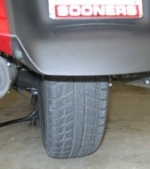 Just thought I would introduce myself. My name is Bill Goodwin, I am from Reading Kansas. Just went to the darkside. My first ride was this last thursday sept 20th. I ride a 1988 goldwing (gray). Really takes some getting used to especally in the corners. I go by the name of readingracer on here and a couple of other forums.

Searchng post's and almost sure i cant see any other place to post but here to begin. Sooo someone please tell my how to post and ask for advice for a 2008 Dyna Streetbob rear tire. Please and ty.

Welcome and go to the home page, scroll down to the HD forum.
Craig

New to the group.

Hello all, my name is Steve and I'm new to this group. I"m from Alaska

and I ride an 09 Kawasaki Vulcan 900 Classic LT. I've heard of darksiding before and never really gave it a thought until this past summer when I realised I only got 6000 miles on the factory rear tire and the tech's at the shop said that that's about average for m/t's. So I watched some Youtube videos, did a Google search, and here I am. (Hey, how's it going?) I've been creeping

around this group as a non-member for about a week and read a lot of good info and had a lot of questions answered just by doing so.

for the make, model, and size tire that will work, and the "how-to" because of course, no shop wants to do it.
So I just wanted to introduce myself and say hello, and when I have questions that can't be answered by reading, I'll ask.
Thanks for admitting me,
Steve

Welcome to the DS. Your right, do your home work make sure its right for you and if it fits go for it . You will never go back.
Take care, Be safe.

Another MC rider that finally woke-up! Howdy y'all,been ridin a bike as long as i could walk.All this anti talk i kept hearing about Goldwing riders going Darkside made me find out why they hated this idea.I bought me an Austone 175R16 and mounted it a few days ago.Rode around fairly slow for a couple miles to make sure i could feel the bike and then got on the interstate.I ran my bike up to 107mph for 2 miles,laying it down as far as i could go and i am absolutly sold on this tire.

Sooooo,i guess i will be the next Darksider to say...."I WILL NEVER BUY ANOTHER REAR MOTORCYCLE TIRE FOR A GOLDWING"
There's no comparison!

Just became a DS today. Mounted the Austone on my 95 GL1500SE. I'm a member of goldwingdocs and have been studying it since last fall when I bought the bike. Not sure how to get a number not that I did it for a number. Retired from the Army in 98. Been riding Goldwings for about 6 years. Live in NC. Lot's of good roads here. PGR Member in NC and VA. Good to meet y'all. Oh yeah, somebody told me y'all had cookies! LOL

Hello everyone, We are planning on going dark side and would like some advice. We have a 98 Honda Valkyrie standard. What tire should we be looking for?

Valkyrie Tigress wrote:Hello everyone, We are planning on going dark side and would like some advice. We have a 98 Honda Valkyrie standard. What tire should we be looking for?

Check out this this page
http://www.valkyrieriders.com/shoptalk/CarTire/home.htm

Might answer your questions and may make you think of some new ones,
post up again and we can help ya find out what you need to know to make an informed decision.

jebrs2 wrote:New to darkside, what's the difference running a tube or not? I currently run a tube and M/T on my V-star1100. I have a spoked wheel. Will I need a tube to darkside with the same rim? I know, this could be a really dumb question! Also, thinking about a Goodyear Eagle tire(195-60/15 C/T vs 170-80/15 M/T). Am I way out there as far as size/compound?

Yes you will need a tube to run spoke unless you seal the rim and others have done this with great success! Do a search on here for the sealing of rims.

http://www.hickmachine.com/ I got the CTR and love it!

My name is Larry, I live in North Carolina. I posted earlier about becoming a DS. I have now become a DDS. I put the Austone on the rear of my 95 Wing and a BattleAx on the front. Just got back from a 1500 mile ride thru the mountains of VA and WV. Of the 1500 miles, less than 200 were on 4 lane roads. What a great ride!! I also did a 16 hour Patriot Guard ride, with my 12 year old son to Arlington and back. I love the feel of these tires. They track so well and handle wet roads better than I could even imagine.

Hi, I am new to the Darkside with a 98 Valk with Goodyear att 205/60r16. I did alot of searching on here to find the tire and presures to run.Love all the info and the good people on here. Thanks for all the info. you have posted on here. Ed Kansas City Mo.

"if you only knew the power of the darkside..."

Gene here. Been riding over 30 years and never been to the darkside. Picked up a new wing (level 2 - NAVI) in February and the back tire lasted longer than most at 12K but its time to re-shoe. I am thrilled with the site and its information and friendliness. I look forward to posting my experiences.

Hi all....I've been using this forum for data for 6 months or so now, so I thought I'd join and share...

My name is Will Jordan, I own and operate a couple of small businesses in the Texas Panhandle, some
70 miles ESE of Amarillo, Texas. Rode my first Dresser at 11 years of age (1978) and been on them ever since.

I currently own a 1990 Goldwing (my 7th 'Wing) and I really like it. The post 2001's have larger engines, but
the fairing, frame and bags (and overall) size is still bigger on the 1990-2000 class of Goldwings. Personally, I
want the biggest damn 2-wheeled machine ever to roll...Everything's bigger in Texas, ya kno?

So, I found this 'Darkside' thing just as I was looking to replace that wore-out Elite-3 turd on the front of my bike. After
reading extensively on this forum, I went with the Bridgestone Battlax BT-45V sized 140/70 R18. When it came in, I looked
at that thing and said " ****...there is no way in hell that thing is gonna fit on the front of that bike..." I figured
I was gonna be out another $121 to get the next smaller size...but, the thing actually fit, and - with 2.5 oz
of Dyna-Beads, it rides smooth as glass. Honestly, it was like bolting on power steering - better handling (especially in parking lots)
and a thicker, beefier feeling on the open road. I run 28 psi (a little low, some of you might say, but higher pressure made it squirrely
for me, so the little bit of 'drag' smoothed it out). Wish I knew of this years ago...Got about 7,000 miles on the front. As far as
the speedo - the stupid thing was off to start with, and that big tire actually got me closer to accurate than ever before.
( 2 mph off now compared to 7 mph before)

So, today (11-20-2013) I mounted the Dunlop run-flat CT, sized 195/55 R16 - @ 36 psi. Same scenario when it arrived. I mean, this thing
looked friggin' huge. But, it fit - and doesn't rub on a stock 1990 config with air-shocks. I noticed minor handling changes on
the way home, but nothing seriously abnormal. It was like sitting on top of a gyroscope....but Goldwing riders are already somewhat
familiar with this effect because of the opposed-engine the 'Wing sports.

I am truly impressed with this setup...only got 70 miles with the double-darkside in place, but daaaaaamn...I have no problems
with putting my Ol' Lady on the back of this bike and taking a trip. Greater stability, more rubber in contact with the road, longer
tread life....what's not to like...??

I would, however, reinforce the prevailing theme of this Forum: Inexperienced Riders should not attempt 'Darksiding'.
Especially the 'crotch-rocket' variety of Rider. As I see it, this is a 'thing' for the 'Big Boys'...and only the 'Big Boys'. I've got over
1200 lbs. on my 'Darkside' setup.....do you ??

Oh, during my research I found a site (shoulda bookmarked it, cuz I can't remember its addy) listing shops all over the nation that will
do DarkSide mounts. I asked the guy who did mine if I could post his shop info about this, and got an enthusiastic YES...so, if you're near
the Amarillo area, go see Kevin at:

Yep new, with many thanks and a ?

Howdy, many thanks to all the people that makes this thing run, my hats off to you.

I think it's going to be about the size of a spare. what I need is any and all help ya'll can give me.

I'm new to this forum thing so if this is the wrong place to put this let me know. I got the gray hair but I think I can follow direction;

uuummm, what bike are we talking about here...?

That tire size sounds familiar...if that's the one I took off my Goldwing, then
see my post for CT size cross-reference...

I hope that helps because I need some help in a bad way.

The first number there is your tire height in centimeters...the second is your tire width. The smaller the
second number is, the wider the tire is. So, based on that....

Thank You for the Darksiders forum and letting me join. I have been reading as many of your posts. Own a 10 Victory Cross Roads, this is my third victory. Ordered a Bridgestone Potenza GO19 Grid and should get it next week. Thank you again
.

TK2-425 wrote:.you want the biggest tire you
can mount without rubbing.....

will not a larger tire slow steering response?

it will some, but the whole point of Darksiding is to increase the tire contact surface area, increase load range and
extend tire life. and, lets face it, these big Dressers aren't exactly what you'd call 'nimble' to begin with...So,
I went with the biggest things I could make fit...and my 'Wing handles great. Takes some getting used to, tho...

my first blow out was on my 02 Goldwing and at 65mph as well it's weird that it just feels like a low (very low) tire until I got to 40 and the slower I got the harder it was to hold on to. and that was a MC tire. love this CT